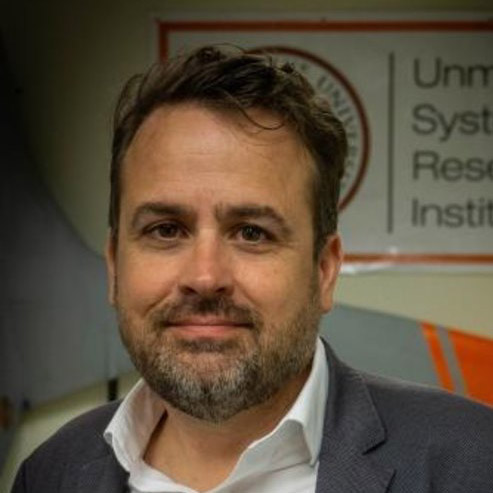 Jamey Jacob is the Director of the OSU Unmanned Systems Research Institute John Hendrix Chair and Professor of Aerospace Engineering in the School of Mechanical and Aerospace Engineering at Oklahoma State University. His current efforts are focused on observation and measurement applications of unmanned aircraft and their enhanced operation in the national airspace for commercial and industrial applications. He is currently lead on a $5 million NASA project to use drones to aid in future weather prediction and reporting for advanced aerial mobility, including drones and urban air taxis. He received his B.S. in Aerospace Engineering from the University of Oklahoma in 1990 and his M.S and Ph.D. in Mechanical Engineering from the University of California at Berkeley in 1992 and 1995, respectively. He was a National Research Council Summer Faculty Fellow in the Air Force Research Laboratory and received the SAE Ralph Teetor Award, the Lockheed Martin Teaching Award, and the OSU Regents Distinguished Teaching Award, among other teaching and mentoring awards. He is a native Oklahoma and dedicates much of his efforts to K-12 education, STEM workforce development, and increasing diversity in engineering and science.