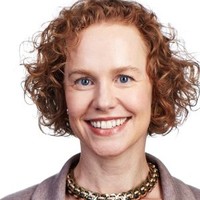 Kirsten Ostherr, PhD, MPH is the Gladys Louise Fox Professor of English and Medical Humanities at Rice University in Houston, Texas, where she is a media scholar, health researcher, and technology analyst. She is founder and director of the Medical Futures Lab (2012-present). Her research on trust and privacy in digital health ecosystems has been featured in Marketplace Tech on NPR, The Atlantic, STAT, Slate, The Washington Post, Big Data & Society, Catalyst, and the Journal of Medical Humanities. Kirsten is the author of Medical Visions: Producing the Patient through Film, Television and Imaging Technologies (Oxford, 2013) and Cinematic Prophylaxis: Globalization and Contagion in the Discourse of World Health (Duke, 2005). Kirsten is currently writing a book called Robot Pathographies: Datafication, Surveillance, and Patient Stories in the Age of Virtual Health. Kirsten has extensive experience using human centered design as a technique for patient collaboration in health technology development. She co-created Medicine in the Digital Age on edX, an open, online course that has reached over twenty thousand global learners. She has spoken to audiences at the White House, the Department of Health and Human Services, the World Health Organization, the National Library of Medicine, TEDx, the mHealth Summit, Medicine X, the Louisville Innovation Summit, the Bauhaus, and in Germany, Spain, France, England, Sweden, Hong Kong, and Taiwan. Kirsten received her PhD in American Civilization from Brown University and her MPH from University of Texas Health Science Center, Houston.